The IMF is the latest official body to predict economic catastrophe – or at least a prolonged recession – if the UK leaves the EU without a deal. To be fair, the analysis presented in the IMF’s April World Economic Outlook is a good example of its kind and relatively easy to understand. Nonetheless, the conclusions are still far too pessimistic.

In short, economists at the IMF have modelled two no-deal scenarios, A and B. Both assume new barriers to trade, with B also assuming significant disruption at borders and a severe tightening in financial conditions. The level of GDP is projected to be around 3.5 per cent lower than otherwise within a few years, with a steeper initial decline in scenario B. (See the snip below.) Given the anaemic UK growth rates in the baseline, this implies full-year recessions in both 2019 and 2020. 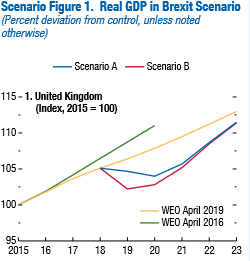 Of course, like any such study, the results depend on the assumptions made. A few of the IMF’s assumptions are relatively benign. But most of the damage comes from an implausibly large increase in the cost of non-tariff barriers (NTBs): a whopping 14 per cent for additional NTBs in both scenarios, on top of the 10 per cent already assumed in the IMF’s baseline (where the UK quits the single market and customs union but secures a comprehensive free trade agreement).

Such large numbers are very hard to square with the experience of real businesses trading with the rest of the world, let alone with most academic surveys. As ‘Harry Western’ has pointed out (in a similar piece to mine), Kee and Nicita suggest that the average tariff equivalent of NTBs facing UK exporters to the EU, weighted by imports, would be just 3.4%. The same authors argue that ‘if the UK fails to secure a new trade deal with the EU and must face tariffs with no preferences, total UK exports to the EU would drop by at most 2%. The impact is small because the EU’s import demand for UK exports is fairly inelastic, especially for the products that may face higher tariffs’.

Other studies also use far lower numbers than the IMF study. For example, even the ‘pessimistic scenario’ in Dhingra et al is based on an increase in non-tariff costs of only 8.3%. In contrast, the IMF appears to assume both that EU membership has delivered huge reductions in the costs of NTBs, and, at least as importantly, that all these benefits would quickly be lost simply by the act of leaving, even though UK and EU regulations would initially be identical. That’s worst-worst case stuff.

Some other assumptions are less critical, but also relatively pessimistic. For example, the IMF assumes i) that the UK’s planned unilateral tariff cuts in a no-deal scenario only last a year (despite having a positive impact over this period), ii) that it takes two years to replicate the existing EU trade deals with third countries (even though many of these have already been rolled over), and iii) that no new trade deals are done over the forecast horizon.

In its long-run analysis, the IMF also assumes a further hit to GDP from a reduction in net migration to the UK. But that would depend on policy choices still to be made by the current UK government, or a future one. It has always struck me as odd that opposition politicians cite lower migration as a long-term cost of Brexit, when presumably they would do things differently. And to the extent that the UK economy is smaller than otherwise simply because there are fewer people, per capita GDP may not be affected at all.

Finally, in common with almost all these studies, including the Whitehall analysis of the long-term impact, the IMF assumes that ‘no deal’ is permanent. However, it may simply be an alternative stepping stone to a long-term agreement. Leaving on WTO terms could be an opportunity to reboot talks with a new UK negotiating team, resulting in a better deal a little further down the line (‘no deal for now’). That may look like a forlorn hope today, and would certainly require a lot of work to patch up relations. But taking this option off the table permanently would surely undermine the UK’s bargaining position even further.

The IMF’s numbers are at least more credible than those initially published by the Bank of England last November. The Bank also assessed two no-deal scenarios, with GDP projected to be as much as 7¾ per cent lower by end-2023, relative to the November 2018 Inflation Report projection, and up to 10½% lower than the May 2016 trend.

However, in the words of the Bank itself, “this analysis includes scenarios not forecasts”. Bank economists deliberately chose extreme assumptions to produce worst-case numbers, mainly for the purpose of stress testing the banking system. These numbers should never have been interpreted as the Bank’s view of what is actually likely to happen. Indeed, the extreme results were reminiscent of the ‘severe shock’ scenario in the (now infamous) 2016 Treasury assessment of the immediate impact of a vote to leave the EU. This warned that GDP would already be 6 per cent lower, and that unemployment would surge, which we can surely now all agree was hopelessly wrong.

In reality, both the UK and EU now have contingency plans which would significantly reduce the negative economic impacts of no deal. (Civil servants have received a lot of stick recently, but deserve plenty of credit here.) We also know that there has been extensive precautionary stockpiling by manufacturers and retailers.

Even the Bank of England’s own survey of UK companies’ preparations suggests that around 80 per cent of companies “judged themselves ready for a no-deal, no-transition Brexit scenario”. That may not make much difference in the long run, but would help tide the economy over the period between exiting with ‘no deal’ and negotiating a better one.

What’s more, the Bank itself has already rowed back on its earlier estimates of the impact on GDP. Despite repeating his warnings about the risks of no deal, Mark Carney has said that there is no longer any need to worry about the impact on the financial sector (oddly enough, his main area of responsibility). This directly contradicts the IMF analysis, which assumes a big hit to this sector too.

There can be little doubt that leaving the EU without a deal would be a significant economic shock. Nonetheless, there are good reasons to believe the impact would be manageable and short-lived. The German Ifo institute has suggested that a ‘hard-but-smart Brexit’ could reduce the total cost to as little as 0.5 per cent of GDP. That may be too optimistic. But even a hit of 1 per cent spread over a year or two would be far from the disaster that ‘no deal’ Project Fear is predicting.

This is an expanded version of a piece which first appeared on CapX.