The recovery in the UK economy is already taking shape nicely – and the shape looks increasingly like a ‘V’, where activity ‘bounces back’ quickly and returns to more normal levels much sooner than most currently expect. Despite this, many commentators are still pessimistic and even eager to emphasise the downside risks. It is time to view the glass as ‘half full’ instead.

Let us start with what we already know. The economy shrank by an unprecedented 25 per cent in just two months between February and April. But it could have been even worse. The Office for Budget Responsibility’s latest projections for the public finances are still based on a 35 per cent fall in GDP, sustained for a full three months. The Bank of England had warned of a 30 per cent decline.

What’s more, there is now ample evidence that April was indeed the trough, and that activity picked up sharply in both May and June – even while large parts of the economy were still shut down. This is clear from the experience of simply walking down almost any local high street or talking to almost any business that is able to open. But it is also showing through in the surveys and hard data.

For example, the ONS now publishes regular ‘faster indicators‘. These include ‘rapid response surveys. which show that the vast majority of businesses were trading again by mid-June and that employees are gradually returning from furlough. (It is worth noting that the headlines that you often see for the total number of jobs protected by the government’s job retention scheme will include some people who have already gone back to work.)

The monthly surveys of overall economic activity, such as the Purchasing Managers Indices (PMIs) published by Markit, also improved sharply in both May and June.

At this stage someone usually points out that the PMI surveys ask companies to compare their current activity levels to those a month earlier, and that a sub-50 index implies that the economy is still contracting on a month-on-month basis. But I would not take this literally. We already have plenty of reasons to believe that UK GDP surged in May – including a 12% m/m jump in retail sales – even though the PMI was then only 30.

In practice, as Markit’s own Chris Williamson has noted, the results of the PMI surveys correlate more closely with 3m/3m and annual rates of change in GDP. This suggests that respondents are actually thinking more about the recent trends over several months. The sub-50 readings on the PMI in May and June are therefore consistent with a contraction in GDP on a 3m/3m basis, but at a much slower rate than in April. In turn, this is consistent with large m/m increases in the level of activity in May and June themselves.

Alternatively, we could interpret the latest PMI results as a rough indicator of where activity is compared to its ‘normal’ level. That interpretation might be too bullish. But, either way, the bounce since April has been impressive.

Indeed, both the OBR and the Chief Economist of the Bank of England, Andy Haldane, have now acknowledged that the economy is performing better (or at least less badly) than either had predicted. Even the record level of government borrowing in the first two months of the financial year was slightly below the path that the OBR had pencilled in.

I’d go further and say that an initial ‘V’ is now nailed on. Some people will understandably be reluctant to venture out and spend, even if they are allowed to do so. But the latest polling suggests that a clear majority of the public support the further easing of the lockdown.

Some households have been hit disproportionately hard, including many poorer families and those self-employed who have not been able to benefit fully from government support. Many of those on the government’s furlough scheme are understandably worried about losing their jobs when it ends. Nonetheless, most households have actually built up their savings during the lockdown.

Pent-up demand is therefore still likely to be strong. The main constraint on spending has been the restrictions on the opportunities to spend, rather than income or willingness to spend, and these restrictions are now being lifted.

I’d also be more confident in the ability of businesses to adapt to the new rules and guidance, particularly now that there is more flexibility in those applying to social distancing (‘one metre plus’).  Even if some sectors do take longer to recover, this need not hold back the economy as a whole, especially if consumers divert spending to activities where the restrictions are less of a constraint (e.g. from sit-down dining to takeaways and deliveries).

Of course, it is still too much to hope for a neatly symmetrical ‘V’-shaped recovery, where GDP returns to its pre-crisis level as quickly as it fell. Even my own best guess at a profile for GDP, shown in the charts below, has a slight ‘kink’ as the initial rebound slows a little. This reflects the likelihood of some persistent uncertainty about the virus and about job prospects, as well as continuing ‘social distancing’ frictions in some sectors, notably leisure and hospitality. 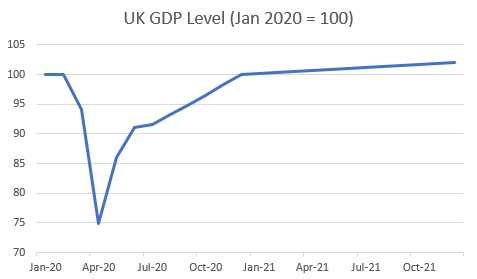 Others might therefore prefer to call this a ‘lazy V’, or an ‘initial V’ followed by a ‘Nike swoosh’. But whichever way you want to describe the exact profile, UK GDP should get back close to pre-crisis levels much sooner than most had anticipated. What’s more, the recovery will look (and feel) far more like a ‘V’ than the ‘U’, or even ‘L’, that some had feared. (Wikipedia has a helpful summary of how these different terms are commonly used, but a U-shape would be a much more gradual return to normal and an ‘L’ would be a more prolonged recession.)

So, why the continuing pessimism elsewhere? In part this may reflect several biases, including what Merryn Somerset Webb has called a ‘bias towards misery‘: bad news usually ‘sells’ better than good news, many commentators are reluctant to appear upbeat about anything in the midst of a health emergency, while others would never want to give any credit to a government led by Boris Johnson.

But to be fair to the pessimists, there is also still a chance that the initial ‘V’-shaped recovery is just the first stage of a ‘W’. This ‘double dip’ scenario could come about for one or both of two reasons.

First, there could be a devastating second wave of the coronavirus itself. This would presumably force the government to reimpose the lockdown, or at least prompt many consumers and businesses to behave as if it had. Indeed, the OECD has explicitly modelled a ‘double hit’ scenario for each of the major economies.

There are others much better qualified than me to judge the likelihood of this happening from an epidemiological perspective. Nonetheless, most of what I have seen suggests that this risk is now small, and that the UK is much better prepared in any event than it was in March. Some restrictions may be reintroduced periodically at the local level, but the appetite of both the government and the general public for the return of a nationwide lockdown will surely be limited.

The second risk – and a more obviously economic one –  is that the rise in unemployment so far might only be the tip of a very large iceberg. It is certainly possible that many more job losses will follow in the coming months as the furlough scheme is wound down. But again, I think it is right to be relatively optimistic.

Crucially, the timetable for the further easing of the lockdown is running well ahead of the timetable for scaling back the employment subsidies under the furlough scheme. Unlike in 2008-09, the financial system is still working well, and there has been a huge and coordinated fiscal and monetary stimulus. The UK’s relatively flexible economy and labour markets are also pretty good at creating new jobs, if allowed to do so. Getting children back to school in September would make a big difference too.

I would also expect the tone of the media coverage to change soon. We can already be confident that the headline numbers from May onwards will be spectacularly strong, even if from a much lower base. Many institutions are likely to be revising their economic forecasts higher too – including the OBR and Bank of England – contributing to the feelgood factor.

In short, ever since the early days of the coronavirus crisis, pundits have been debating how quickly activity would rebound when the lockdown is lifted, or indeed whether it could recover at all. Thus far, the evidence points to more pleasant surprises.

One thought on “‘V’ for recovery!”