he UK’s latest labour market data, released this morning, have predictably led to fresh calls for even more state intervention to ‘create’ jobs, or at least ‘protect’ them. But the most important thing the government can do now is to continue to lift the lockdown.

Let’s deal briefly first with the headline unemployment rate, which is a three-month average based on the Labour Force Survey (LFS). This continues to confuse many people. Most commentators expected it to rise sharply in the three months to April, reflecting an even bigger jump in the single-month measure for April itself. In fact, both numbers were barely changed at just 3.9%. 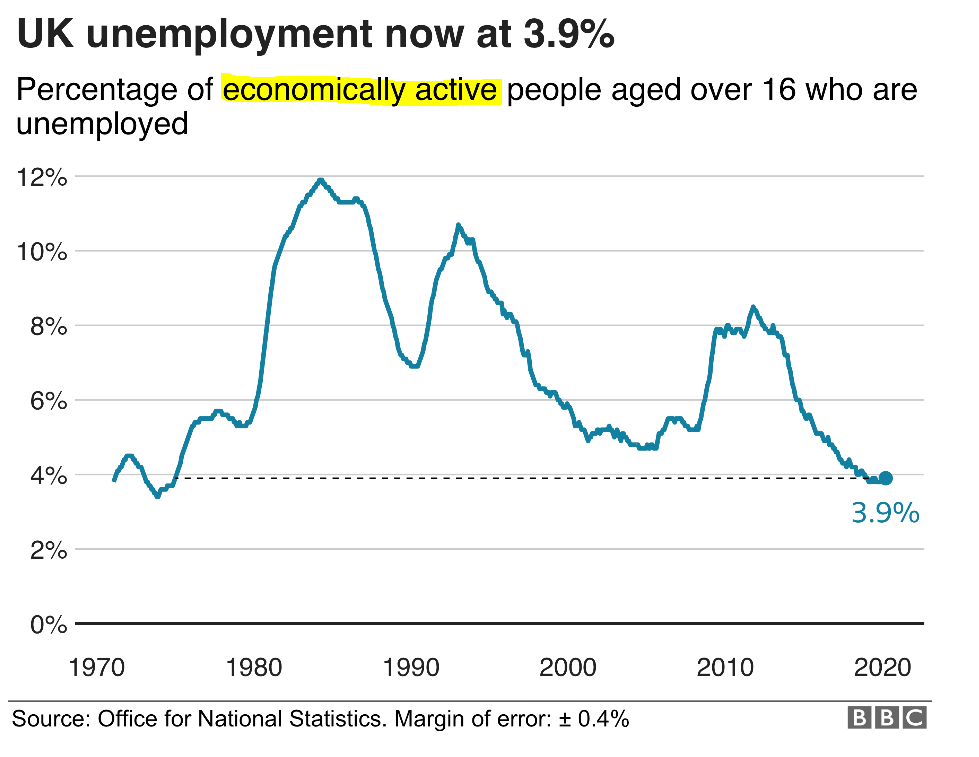 Why? In part this is because workers furloughed on the government’s job retention scheme still count (rightly) as employed. But in addition, people who are no longer looking for work (probably because they know they are unlikely to get any due to the lockdown) do not count as unemployed.

In April, the LFS single-month measure of employment fell by 429,000, but 425,000 people dropped out of the economically active labour force. This meant that, with other changes, unemployment only rose by 34,000 and the LFS measure of the unemployment rate barely changed.

This also helps to explain why this measure of unemployment has not increased much in the rest of Europe either: unemployment in the euro area rose only slightly, from 7.1% in March to 7.3% in April, which was actually where it was in January. Despite what some daft conspiracy theorists are claiming today, the UK uses the same International Labour Organisation (ILO) definitions of employment and unemployment as everyone else.

However, the devastating impact of the collapse in economic activity was evident in the rest of the labour market report. By the fourth week of April there were nearly 8.4 million people ‘temporarily away from paid work’ (similar to the number of jobs then being covered by the job retention scheme). There has also been sharp falls in the average number of hours actually worked by employees and, especially, by the self-employed. Job vacancies have also collapsed.

Above all, the more timely ‘claimant count’ measure of unemployment, which is available for May, has continued to climb. This counts the number of people claiming Jobseeker’s Allowance (JSA) and those on Universal Credit (UC) who are ‘searching for work’. 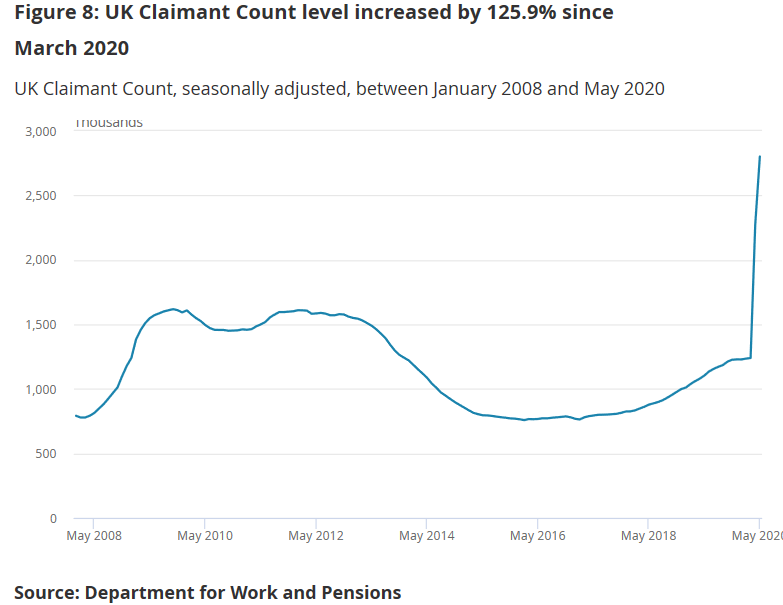 Strictly speaking, this is only a proxy for unemployment – and possibly an overestimate. In particular, changes to the benefit system mean that more low-earners are now eligible for unemployment-related benefits, even though they might actually still be in work. (I believe this group mainly comprises people working much shorter hours as a result of the lockdown.)

But the big picture is clear: the claimant count measure has jumped from 1.2 million people in March to 2.8 million in May. The corresponding ‘claimant count rate’ has also more than doubled, from 3.5% in March to 7.8% in May.

What’s more, early estimates for May from PAYE returns suggest that the number of payroll employees fell by just over 600,000 compared with March (though if this includes the 429,000 fall in employment in April from the LFS survey, it also suggests that the pace of decline slowed sharply in May).

So, how bad is this? First, these figures are no surprise. Indeed, given the 25% fall in GDP from February to April it is arguably a relief that employment has ‘only’ fallen by 600,000, and that the ‘claimant count’ measure of unemployment is still below 8%. This should also be as bad as it gets, for now, based on the recovery in activity that is already being seen in other data.

The traditional LFS measure of unemployment is likely to catch up a little over the summer, but it is important to understand why. This need not be because of new job losses. Instead, more people may decide that labour market conditions are improving enough to make it worthwhile to look for work again. This will push up unemployment on this measure, until they either find a job or give up. However, a temporary rise in unemployment for this reason alone would not necessarily be a bad thing.

A far bigger concern is that unemployment could surge again later in the year as the job retention scheme is wound down and workers who are currently furloughed are made redundant. However, the scheme will not end until October, by when the most vulnerable sectors (notably the hospitality industry) should be back to something closer to normal. Provided the lockdown continues to be lifted and health restrictions eased further – including the two-metre social distancing rule – there is a good chance that an unemployment rate of around 8% is as bad as it gets.

Of course, this is still bad, and there are substantial risks that it could be worse. There may be a need to do more in the autumn if the recovery stalls and demand remains weak. But, in my view, it would be wrong for the government to leap to the conclusion that more is required straightaway, either to ‘create’ jobs or to ‘protect’ them.

It is worth noting that 8% was a normal level for unemployment in countries like France before the pandemic. Listening to the TUC and adopting French-style labour market policies, including more regulation and higher minimum wages, would only make sense if we want to be stuck with French levels of joblessness.

Instead, the focus should be on supply-side reforms, including liberalisation of planning laws, and reducing labour costs, for example by cutting employer NICs, rethinking increases in the National Living Wage, and scrapping the apprenticeship levy. If and when our relatively flexible economy and labour market is allowed to work properly, we may still be pleasantly surprised at how quickly unemployment comes back down again.

This is an extended version of piece first published by CapX

PS. another one for the pedants. The typical reporting of the data for the job retention scheme below isn’t entirely accurate because i) the figures are for ’employments’, not ‘workers’ (an individual person can be furloughed from more than one job and therefore counted more than once) and ii) some people may already have come off the scheme, so the true figure for those covered ‘now’ is likely to be lower.