On Wednesday the OECD’s latest Economic Outlook presented a relatively downbeat assessment of the impact of the coronavirus pandemic on the global economy (more ‘U’ than ‘V’). The report also flagged up some specific concerns about the vulnerability of the UK, which prompted some particularly gloomy headlines here. But is the OECD on to anything new?

In short, no. Indeed, we shouldn’t expect too much. The Paris-based OECD, like the IMF, is an intergovernmental organisation funded by member states. In my view, its economic output is most useful as a reference source, notably for international comparisons of policy responses, and the OECD database is one of the best. Its analytical work is usually pretty good – often excellent – and well presented.

However, I wouldn’t put much weight on the OECD’s economic forecasts, which are typically close to consensus and not especially accurate (even at the best of times). The OECD also rarely provides any great insights about individual countries, which isn’t really its job.

This report is little different. The good news is that I’ve read it so that you don’t have to.

First, the OECD did not talk the UK down as much as some of the headlines may have suggested. For example, the BBC lead was ‘UK economy could be among worst hit of leading nations’, the Guardian opted for ‘UK economy likely to suffer worst Covid-19 damage’, and Sky News went all in with ‘UK to see ‘worst’ economic contraction among developed countries’. In fact, the UK does not stand out very far, especially if the forecasts for 2020 and 2021 are taken together.

The Outlook discussed two ‘equally probable’ scenarios – a ‘double hit’ in which a second wave of infections, with renewed lockdowns, strikes before the end of 2020, and a ‘single hit’ in which another major outbreak is avoided. Credit to the OECD here: this is a good way of thinking about the risks and illustrates the importance of being clear about the assumptions underlying any forecast.

In the single-hit scenario, the OECD predicted that UK GDP will fall by 11.5% this year. But this would actually be smaller than the 12.8% hit pencilled in by the Office for Budget Responsibility (OBR), or the 14% suggested by the Bank of England.

In other words, claims that the OECD has said the UK will shrink by more than any other developed economy this year are only true in one of the two scenarios – and even then only if you believe in GDP forecasts to one decimal place…

Admittedly, the UK is expected to suffer a much bigger fall in GDP in 2020 than some other countries in its peer group, notably Germany, the US and Japan. But the UK is also expected to benefit from a relatively large rebound in 2021.

As a result, in the single-hit scenario, Germany is the only G7 economy which is forecast to do significantly better than the UK over the two years combined (and even that follows a long period when the German economy has underperformed). 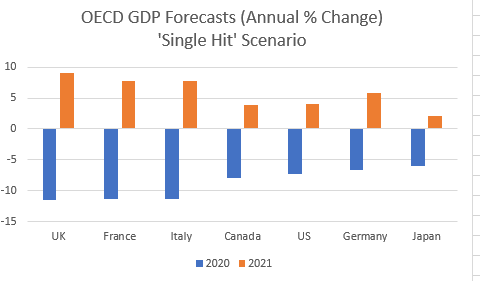 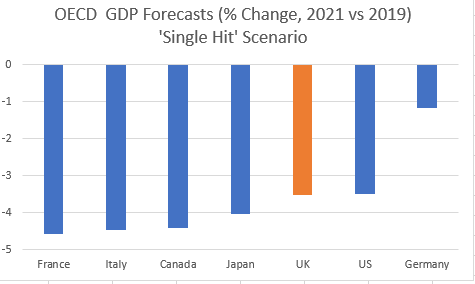 So much for the numbers. What about the analysis? Again, the UK isn’t singled out quite as much a some would have us believe. The report notes that the UK’s lockdown was introduced ‘somewhat later than in neighbouring countries’, which might be interpreted as a criticism but is also just a fact. More positively, the report also notes that ‘the government has swiftly put in place a comprehensive economic support package’.

More interestingly, the OECD makes the point that ‘as a service-based economy, the United Kingdom is heavily affected by the crisis’, where ‘trade, tourism, real estate and hospitality are all hard hit by confinement restrictions’. That’s undoubtedly true too, though the services versus manufacturing divide can be overdone: financial and other professional services, for example, have been relatively busy, whereas some of the most dramatic falls in activity have been in traditional industries such as the auto sector. For example, the UK made a grand total of 197 cars in April and, wait for it, 15 commercial vehicles.

What’s more, the relative weights on services and manufacturing are far less important than the progress in easing the lockdown. Looking at a range of countries, there was a clear correlation between the extent of the official lockdown and what happened to GDP in the first quarter of the year: greater stringency was associated with bigger falls.

Looking forward, the speed at which the UK can safely lift the lockdown is clearly going to be the key factor in driving the recovery. It could, and probably will, prove the OECD’s forecasts to be far too pessimistic.

Finally, the OECD’s policy recommendations were entirely predictable. Given its pessimistic assessment of the economic outlook, it is no surprise that it is relatively keen on the government providing further policy support. This includes restarting the job retention scheme if there is a second wave of infections and renewed lockdowns.

Given the OECD’s longstanding lack of enthusiasm about Brexit (did I mention it is based in Paris?) it is also no surprise that the report recommends that the UK should make a temporary arrangement to stay in the EU Single Market beyond the end of the year. Oddly though, it doesn’t refer to the Customs Union, nor is there any serious discussion of the interaction between the coronavirus crisis and the costs and benefits of completing Brexit. This advice feels like an afterthought.

Overall, there isn’t much new here after all. Unfortunately, most people seem to have missed the OECD’s one bold recommendation, which is that the UK government should also consider ‘temporarily postponing future increases in the National Living Wage to support labour demand’. That’s a pity, because its far more interesting than another set of spuriously accurate GDP forecasts.

This piece was first published by CapX

PS. After this piece was first written I checked exactly what the OECD said about the quarterly profile for UK GDP. They were expecting a fall of 19% q/q in Q2 (after 2% in Q1). This is also still too pessimistic, in my view, but already looking better than either the OBR or BoE!