The economic data to be reported over the next few weeks will be pretty grim, adding to the social costs of coronavirus. But if you look beyond the headlines, there are at least half a dozen good reasons to be positive about the prospects for the recovery that will follow.

First, the recovery has already begun. There is plenty of evidence that economic activity collapsed in March and April, but also that it bottomed out last month, even before the partial easing of the lockdown that is likely to begin in May. People have started to find ways to work within (and sometimes around) the social distancing rules and some indicators, such as road traffic volumes, are already edging higher again.

April is also likely to have been the worst point for the social impact, provided a catastrophic ‘second wave’ can be avoided. For example, the number of people who have died each day with Covid-19 in hospitals in England peaked on 8th April and has since been on a clear downward trend. 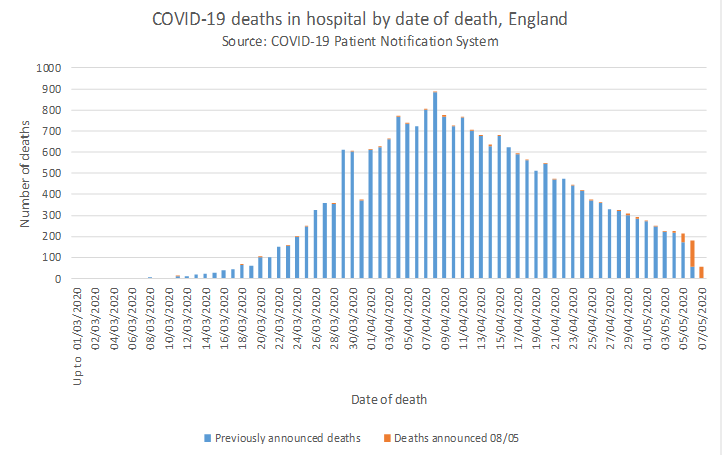 Second, the economic measures have (mostly) worked. The government may well end up spending more than £100 billion on various forms of fiscal support, including wage subsidies under the Coronavirus Job Retention Scheme and meeting a surge in claims for Universal Credit (which has held up better than many expected), as well as other cash grants and tax breaks. The Treasury and Bank of England have also guaranteed huge amounts of cheap finance. Inevitably, there have been some gaps and hiccups. But this relatively well-coordinated fiscal and monetary response has been effective in protecting the great majority of companies, jobs and incomes.

In the meantime, it’s not all been bad news. The lockdown has not closed the UK for business completely. A recent ONS survey found that 77% of companies were continuing to trade as normal in mid-April and, of these, 30% said their turnover had been unaffected by the crisis. 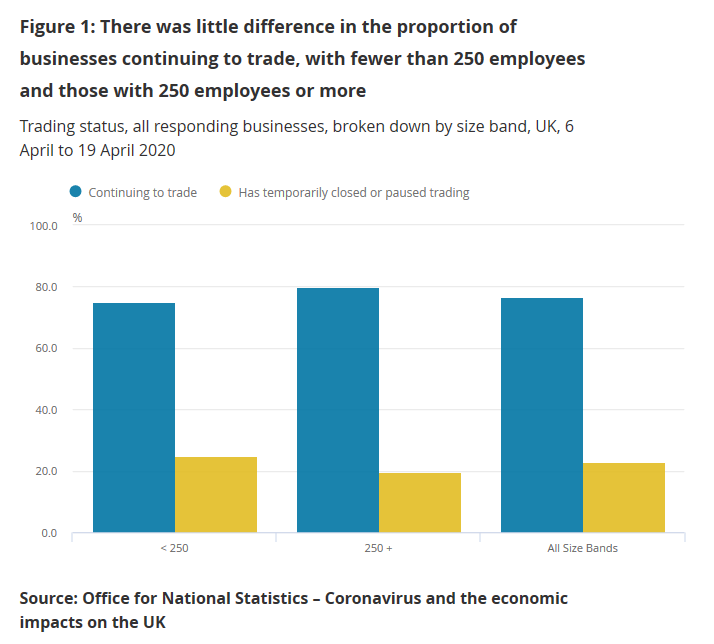 Third, there is plenty of pent-up demand. Most companies have been building up cash and, for most households, spending has fallen by more than incomes, meaning their savings are higher too. Of course, there will be an abundance of caution for a while yet, and some people will want to maintain higher levels savings as a precaution.

Nonetheless, more than a fifth of household spending is ‘delayable’, such as purchases of clothing and household goods, and this spending may only have been postponed rather than gone completely. (The chart below is from the Bank of England’s latest Monetary Policy Report.) 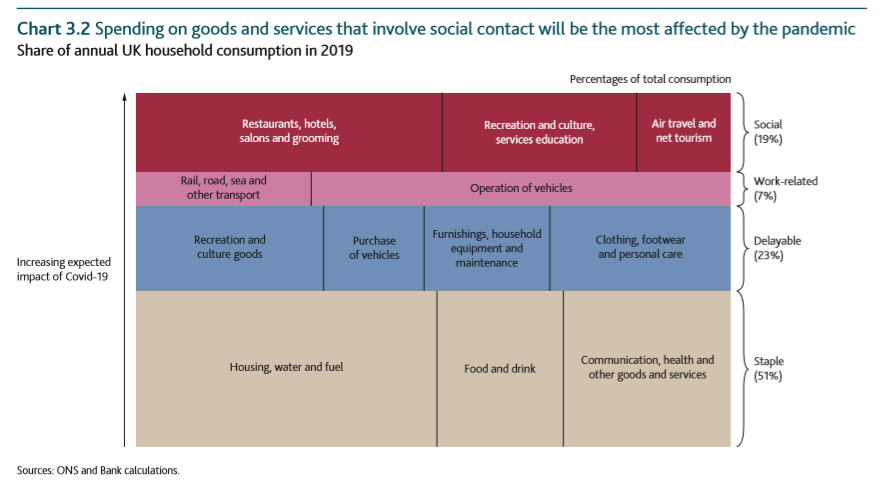 Even some forms of ‘social’ spending could also be higher than normal for some time once the lockdown eases. People might only need one haircut, but some will be keen to catch up on trips to pubs, restaurants or the cinema. Others might be more likely to holiday in the UK and spend money closer to home rather than abroad (though of course we might lose out on foreign visitors too).

Fourth, the economy is great at creating jobs. Unemployment will jump in the short term, but the UK’s relatively flexible labour market did at least enter the crisis in good shape. The employment rate was a record high of 76.6% in the three months to February, with over 33 million in work. The unemployment rate was only 4%, compared to more than 7% in the euro area.

Provided that the government resists pressure to saddle businesses and employers with additional costs and regulations, and rapidly weans the economy off state subsidies, there is every reason to expect the UK economy to replace quickly any jobs that have been lost. Job creation has been one of the success stories of the last decade, and it can be again

Fifth, a chance to reboot productivity. Over the past decade, the flipside of record employment has been relatively slow growth in productivity. However, the chaos unleased on the economy by coronavirus is at least an opportunity to reallocate resources and do things differently. This includes new and more efficient ways of working. More painfully, some fundamentally weak companies that have been holding back productivity and will not survive the ‘new normal’ should be allowed to fail. It may seem insensitive to talk in terms of ‘creative destruction’, or the elimination of ‘zombie businesses’, but this will be necessary to secure a strong and sustainable recovery. It would be helpful if the government lightened the burden of tax and regulation too. The state now needs to step aside as soon as possible and allow markets to work again.

Sixth, other countries are now easing their lockdowns. This is important for many reasons. For a start, it means the global economy should begin to pick up soon, which is good for UK trade, international supply chains, and asset prices. But our policymakers should also be able to learn from what is happening in other countries. Above all, signs of improvement elsewhere should help to reassure UK businesses and consumers that there is light at end of the tunnel here too. Confidence will be a key factor in shaping the recovery. Sentiment can turn quickly, for the better as well as for the worse.

This article was first published by the Daily Telegraph (online)