The coronavirus pandemic is of course primarily a social crisis, but the fiscal costs are also important. A sharp and sustained deterioration in the public finances could have major implications for future government spending and taxation. Many are already asking ‘how will we pay for all this?’ and worried about the prospect of ‘Austerity 2.0’. Fortunately, there are also some good reasons to be sanguine.

Let’s begin with the bad news. A slump in economic activity is inevitable and even desirable; we actually want most people to stop doing what they would normally be doing, in order to save lives. But, in addition to all the other costs, this will hit the public finances hard.

That hit will be due both to the direct costs of the fiscal measures being taken to support public services and protect businesses, jobs and incomes (together likely to be at least £100 billion), and the knock-on effects of a steep fall in GDP on government spending and tax revenues (which could easily add another £100 billion).

Indeed, all the headline figures are scary. Given all the uncertainties, it makes sense to talk in terms of ‘plausible scenarios’ rather than ‘forecasts’, and any hard numbers are more than usually dependent on the assumptions made. But the big picture is clear.

For example, the OBR’s April ‘coronavirus reference scenario’ assumed that, after a 35% slump in the second quarter, the level of GDP would return to its starting point as soon as the end of this year. On the basis, GDP would fall by 13% in 2020 as whole, then rebound by 18% in 2021. The unemployment rate would jump from about 4% of the labour force to 10%, before falling back slowly as the economy recovers.

Other ‘plausible scenarios’ are available. In my view, the initial fall in GDP is likely to be much smaller than the OBR’s first estimate (which I suspect will be revised), but the recovery will take longer.

In this respect, the National Institute of Economic and Social Research (NIESR) is probably closer to the mark. NIESR has pencilled in a decline of ‘only’ 7% this year. Unemployment therefore does not rise quite as far as in the OBR’s scenario, peaking at around 3 million (8.5%). However, NIESR assumes that GDP will not regain its pre-crisis level until the end of 2021.

Nonetheless, the similarities between the OBR and NIESR analyses are more important than the differences. Both assume a huge hit to GDP, followed by a fairly rapid recovery. And while they each have a large rise in unemployment, both assume that government measures (especially the Job Retention Scheme) are effective at limiting job losses.

Either way, there will be a surge in government borrowing and debt. On the OBR numbers (summarised in the table below), public sector net borrowing (PSNB) would be £218 billion higher this year than in the March Budget forecast. This would take the annual deficit to £273 billion, or 14% of GDP, which would be even higher than the peak of 10% reached in 2009-10 in the wake of the global financial crisis.

So, what are the reasons for optimism? First, the OBR’s initial numbers are probably at the high end. My own back-of-the-envelope calculations suggest a smaller hit to GDP this year and hence to government borrowing, reducing the deficit by up to £50 billion compared to the OBR’s projections. This would cap the deficit at about 10-11% of GDP.

Second, even if we take the OBR’s initial numbers, both deficits and debt have still been much higher in wartime, which is arguably the more appropriate benchmark. The OBR’s databank shows that the deficit rose to as much as 27% of GDP in 1941-42, while debt hit 259% in 1946-47. Both these numbers improved rapidly as the economy recovered following the war, and government spending returned to more normal levels. (I’ve pasted the OBR charts below.)

Third, and perhaps most importantly, what is happening now is a one-off jump in annual borrowing (if all goes well) and a step increase in the level of debt, rather than a permanent deterioration in the public finances. The deficit should automatically drop back as the economy recovers next year and the emergency fiscal measures can be wound down.

Total debt will be higher in cash terms, but the debt to GDP ratio is a better guide to the burden on taxpayers. Provided annual borrowing as a share of GDP is kept below the growth rate of nominal GDP (about 3-4% in a normal year), this burden will start falling again. Indeed, the downward trend should resume as soon as next year.

(Incidentally, £200 billion of the increase in public debt over the next few years is little more than an accounting technicality. The Bank of England’s additional support includes a new Term Funding Scheme for SMEs, which is a programme making cheap loans to commercial banks for lending on to companies. Since the Bank of England is part of the public sector, and these loans are not assumed to be liquid, they are added to public sector net debt. This explains why the OBR expects debt to fall sharply, from 93% of GDP to 85%, between 2023-24 and 2024-25, when these loans are assumed to be repaid.)

These points are crucial. Together they mean that there should be no need for large tax increases or spending cuts to bring the public finances back under control. We can still argue about whether the ‘austerity’ of the early 2010s went too far, or whether the burden was fairly shared, but that sort of belt tightening is simply not required today. Those already warning of ‘Austerity 2.0’ can therefore relax a little.

In the meantime, the surge in government spending will be financed by increased borrowing. Some of this will come from an extension of the Treasury’s ‘Ways and Means’ facility at the Bank of England, which is, in effect, the government’s overdraft with the central bank. However, the use of this facility is only expected to be temporary (rather than a permanent monetisation of the debt) and the primary source of funding will still be the sale of bonds on the open market.

Thereafter, there is no compelling reason why the government needs to change its fiscal plans significantly. The new(ish) Chancellor, Rishi Sunak, has announced a review of the fiscal rules left by his predecessor. But the OBR projections for 2021 onwards would still be consistent with the broad principles of balancing the budget on day-to-day spending over the economic cycle and borrowing an average of no more than three per cent of GDP for public investment.

The stock of debt, and hence the cost of servicing that debt, will be higher. Nonetheless, low interest rates and the relatively long average maturity of UK government borrowing provides enough wriggle room here too.

Inevitably there are risks – and these are mostly on the downside. One is that the economy takes much longer to recover than expected. For example, Alan Lockey has sketched a grim future of widespread business failures, mass unemployment, and a permanent loss of confidence (or ‘animal spirits’).

I think that is too pessimistic, partly because the flexibility of the UK economy and labour markets should help activity and employment to bounce back (provided businesses and employers are not saddled with huge additional costs). But obviously the longer the economic disruption continues, the greater the potential scarring.

The crisis is also encouraging calls for additional and permanent increases in public spending – over and above those already planned for infrastructure, the NHS and social care – in a wide range of areas. These include calls for large across-the-board increases in public sector pay and in welfare benefits, and even for the introduction of a (prohibitively expensive) Universal Basic Income.

In summary, to answer the original question, we will pay for all this by a temporary increase in borrowing, to be repaid at historically low interest rates, with the debt burden falling as the economy rebounds. This is not ideal, but then nothing about this crisis is. In the meantime, though, the Chancellor will have to resist pressure for a sustained expansion in the size and role of the state.

PS. in an idle moment (!), I’ve had a go at my own ‘plausible scenario’ (not a hard forecast) for UK GDP as the economy emerges from the crisis. As it happens, I’ve landed somewhere between the OBR and NIESR numbers… 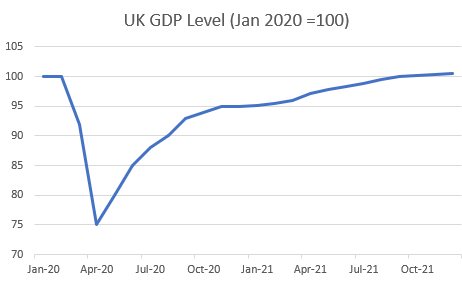 The (still huge) hit of 18% in Q2 is only about half the OBR’s 35% (which I expect to be revised), because I’ve assumed the peak impact of the UK lockdown is smaller (25% in April) and that it starts to be eased sooner (late May). And some of the hit will already have come in Q1.

However, I’ve also assumed that it takes longer for the economy to recover. In this scenario, the level of GDP would not return to its starting point until late 2021, and would still be 5% lower at the end of 2020 than it began the year. Obviously, all little more than guesswork at this stage.